Home » Stories » When the World Held its Breath

When the World Held its Breath

PrevPreviousFind Out David’s Original Way to Fight Against Terror
NextDid You Know Hiking in the Land of the Bible is So Important?Next

At 1am Bat-Galim Shaer realized something was seriously wrong.

Gilad, her 16 year-old son, had not returned home.

Gilad was a responsible and mature boy. This was out of character.

Gilad had told Bat-Galim that he was leaving school and was on his way home to Talmon. He had told her when to expect him. But that time had been and gone. His phone was not answering.

The family drove part of his usual route. Maybe he had run into trouble on his way home? There was no sign of him.

Phoning the mother of Naphtali Frenkel, a boy with whom Gilad was thought to be travelling, made her even more uneasy. He had not yet returned home either, and his phone was switched off too.

They heard that a third boy, Eyal Yifrach, was also missing.

Police determined from phone GPS signals that the boys’ last known position had been near Hevron. But there was no trace of them there. Hevron was not even in the direction of home. Something had happened.

The army became involved; the search lasted for an agonizing 18 days.

The world held its breath, the entire Jewish people praying for a positive outcome.

Bat-Galim and her family were in turmoil. The unknown was unbearable.

What had happened to her only son? Where was her precious boy? Would she ever see him again?

“My soul thirsts for You, my flesh longs for You, in a dry and thirsty land, without water.” (Psalms 63:2)

Bat-Galim explains that in those 18 days of torment something remarkable happened,

“Thousands of people around the world gave us their heart.”

The despair of the three families became far-reaching. People took to social media. Synagogues filled with prayer. ‘Bring back our boys’ were the words etched into the heart of a nation.

The waiting was torturous.

Bat-Galim finally received the dreaded call. The boys had been found: dead.

The teenagers had been kidnapped by two terrorists after innocently trying to hitch rides home. In all likelihood, they had been shot very soon after and their bodies left nearby. Three lives – cut short for no reason.

But, she found strength. She was not alone. The world grieved with her. Differences were put aside as communities united to help support the bereft families. Strangers came to visit them in their home, hundreds wrote to her, memorial ceremonies took place around the globe. The whole world had waited anxiously with her. The whole world now wept with her. Gilad’s murder was a senseless act of evil. Yet, from this tremendous suffering, came a powerful unity.

This unity gave, and continues to give, Bat Galim strength to cope with her loss.

Five years have passed since Gilad’s murder. Bat-Galim still feels the gaping void in her life. She describes Gilad as a special person, wise beyond his years. “It’s rare to meet someone who genuinely asks the question ‘How are you?’ and truly cares about the response. This was our Gilad. He really cared. We miss him dearly.” 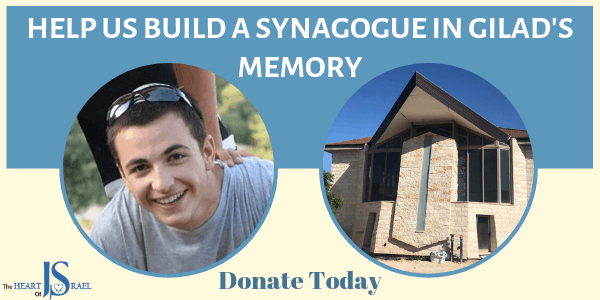 Bat-Galim decided that instead of burying herself in sorrow, she would use her suffering to do good. She was inspired by the unity shown worldwide following Gilad’s murder. She wanted to harness that energy into something powerful and productive.

The continued outpouring of love from total strangers amazes her. “People around the world genuinely care. Our story is their story. We are uplifted by this.”

Total strangers have even named their newborn sons after Gilad. Bat-Galim explains that she is in touch with several people who have called their sons ‘Gilad’ in memory of her son.

“It brings us great happiness and strength to know this. We hope these children will grow into happy and fulfilled adults. These children are his legacy. They will grow-up to live the life he was so cruelly denied.”

Bat-Galim found the courage to speak publicly soon after Gilad’s body was found. Sharing the message that, even in the darkest of times, goodness and hope are within reach.

Bat-Galim’s book about her experiences has recently been translated into English. ‘Expecting My Child’ documents how Bat-Galim coped with the uncertainty of her son’s disappearance and her grief following his death. Her optimism shines through. Despite her ever-present pain, she is determined to live a happy and fulfilling life and spread this positivity to others.

As part of this philosophy, Bat-Galim and her family have initiated a new project. Together with The Heart of Israel, they are fundraising to build a synagogue, in his hometown of Talmon, in memory of Gilad. Their community has expanded and the need for a new synagogue is pressing.

Bat-Galim wants to channel her sorrow into something constructive, as she expresses,

“A synagogue is not just any building. It’s a place of prayer. A place for personal introspection. A place of education. A place of festivity. And, a place to connect and feel part of a wider community.”

The Shaers’ suffering connected them to people far and wide. She wants this synagogue to help others feel this connection too.

In her darkest hour, the world united to lift Bat-Galim’s spirits. She urges people to harness this energy once more. To work together to build – not just a synagogue – but a symbol of hope and unity in honor of her son.