It was no easy decision to uproot his life and make the dangerous journey from his home in Ethiopia to Israel. At the age of 19, Yafet Alemu’s journey had only just begun when an armed soldier walked onto the bus.

He had arrived in Adis Ababa just a few days earlier. From there, he had planned on travelling to America to study medicine. Brooklyn University had offered him a scholarship.

In 1983, Ethiopia was a Communist country undergoing Civil War. Travelling was dangerous. Despite having the relevant documentation for the trip to the United States, Yafet hadn’t made it onto the plane.

Instead, he was arrested in Adis Ababa and interrogated.

they asked adding, “You are trying to escape to Sudan and from there on to Israel?’’ Yafet wasn’t running to Israel and denied the accusation.

But he was a Jew. A ‘crime’ that could cost him his life.

Yafet had grown up in a Jewish village. He was proud of his Jewish heritage and traditions. This was his first exposure to anti-semitism.

Yafet explains, “Ironically, it was this question under interrogation that made me want to make “Aliyah”, move to Israel. I realized I wanted to leave and contribute to a country where I could openly practice my beliefs and celebrate my heritage. My mind was made up. I wouldn’t be going to America. I would be returning to the land promised to my forefathers”.

“And I will give to you and your descendants after you – the whole of the land of Canaan – as an everlasting possession.” (Genesis 17:8)

He needed to travel back to Gondar, where he was studying and from there plan his escape to Israel. It was a three day bus ride and he did not have the relevant paperwork permitting him to make this journey.

Yafet was alone and terrified with nowhere to hide or run.

‘‘It was like an out of body experience. I knew my life was over. Punishment for this sort of crime was being drafted to fight in the Civil War. Most soldiers never returned home. It was clear my dream of getting to Israel was over before it had even started. The only thing I could do was pray. I felt like Daniel, thrown into the lion’s den with only the hand of G-d  to protect me.’’

An idea came to him suddenly. Yafet jumped from his seat and, without being asked, went to help the soldier collect the documents from his fellow passengers. Yafet hoped this would somehow stop the soldier scrutinising his own papers.

‘‘It was as if G-d had planted the idea in my mind. As I handed over the pile of papers, it seemed as if my documents were also in the pile even though they weren’t.’’

The soldier began to inspect them. Slowly the pile shrunk. Yafet’s heart pounded. Just a few more minutes and he would be found out.

“Ok. Return them,” commanded the soldier.

Yafet couldn’t believe it. The pile was left half checked. He was safe. It was a miracle.

He travelled to relatives in the largest Jewish region of Ethiopia. He knew they were in contact with people who could help him.

“I made contact with a man there who hid me for a week. He found someone who agreed to lead me to Sudan in exchange for money. If the authorities found out I was trying to leave the country through Sudan I would be imprisoned or killed.”

It was a long and perilous journey.

“We only walked at night. Daytime was too dangerous. Armed soldiers roamed the whole region.”

Yafet and his escort walked for 28 days in total before reaching Sudan. “I can’t express how exhausted I was. The physical exhaustion from miles of walking in difficult conditions. And the emotional exhaustion of fearing I could be captured at any minute.”

The only thing that kept him walking was a burning desire to reach the Biblical land of his ancestors.

Yafet stayed in Sudan for four months. There, Mossad agents based at the Red Cross camp, found and helped plan his onward journey to Israel by securing travel permits through Greece to Israel.

“Landing in Ben Gurion airport is something I will never forget.” Yafet remembers running to feel the holy ground beneath his feet. “I fell to my knees and touched the ground, thanking G-d with all my heart for helping me survive the journey and returning me to my true homeland.”

“I will gather you from the nations and bring you back from the countries where you have been scattered, and I will give you back to the land of Israel again.” (Ezekiel 11:17)

Yafet now lives in Adam, a town nestled in the picturesque hills of Benjamin.

Today, Yafet feels uniquely privileged. Together, him and his wife have planted the roots of a flourishing family in Israel, with his four children and four grandchildren all living in the Holy Land.

He and his family represent the realization of an ancient prophecy to return Jews to their homeland from all four corners of the world.

“I feel an overwhelming gratitude. I decided when I arrived here all those years ago to dedicate my life to helping others.”

Yafet has done just that. In particular, Yafet is trying to help the Israeli Ethiopian community to break out of a poverty cycle which has contributed to social and educational inequalities.

These are inequalities and injustices with which Yafet is familiar. Despite ultimately becoming a nurse at Hadassah Ein Kerem hospital, the path to get there was by no means easy.

These were difficult blows to be dealt. Despite different customs and traditions, Yafet was raised as a practicing Jew. He left his family and risked his life to move to his spiritual homeland. Yafet hopes future generations will be integrated more smoothly.

These aspirations fuel his work within the Israeli Ethiopian Jewish communities.

“I believe that the poverty cycle can be broken through education. There’s a considerable bad feeling towards the Israeli government and police. There are protests and riots. This is because people in the community live very difficult lives. They want to be heard and they want to improve their quality of life.’’

Yafet dedicates his life to educating young people in his community. Last year, an academic program was launched to help train and prepare young Israeli Ethiopians for medical school. Yafet hopes that projects such as this will bridge the widening gaps within Israel’s society.

Yafet and others like him sacrificed everything to live in Israel. Their stories are those of the stuff of blockbuster movies such as the new Netflix film Red Sea Diving Resort.

Although life in Israel is by no means perfect. Yafet thanks G-d everyday for allowing him to wake up in the land promised to his ancestors.

Israeli society is diverse. However, all communities are cut from the same cloth. The cloth of Abraham, Isaac and Jacob. Yafet prays his community finds acceptance and happiness within the fabric of this extraordinary country. 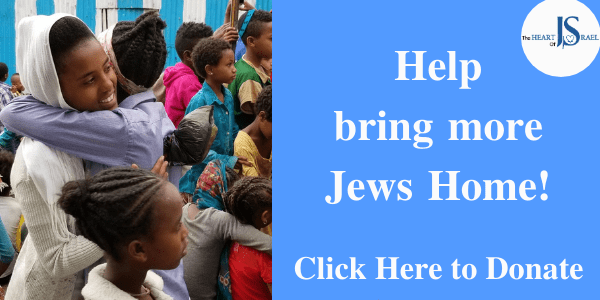