PrevPreviousWhen the nations can not come to Judea, so Judea will go to the Nations

It was 1982 when the First Israel – Lebanon – Israel War broke out. The north of Israel was under heavy attack from “ground to ground” missiles and the Israeli army was focused on the offensive, entering deep into Lebanon.

Leon Blankrot, only 20 years old and recently married, understood the great need for volunteers for the communities and the soldiers who were all near the northern borders. In a short time, Leon, with the other founders, mobilized over 5,000 American volunteers who flew to Israel and joined the war efforts.

This group of volunteers would later become known as the famous Sar-el.

More than 10 years later, in 1995, Leon left his home in New Jersey, made Aliyah (moved to Israel) with his wife Betsy and their 3 sons (who would later be joined by a sister born in Israel). Since then, Leon has played in a couple of roles within the Israeli Government, such as advisor in the  Foreign Ministry and Prime Minister Ehud Barak, and was Director of both the Appeals Authorities of Medical Experiments and the Appeals Authority of Slave Labor fighting for compensation for Holocaust survivors.

Leon starts telling me his story as we sit in his modest office on Hillel Street in Jerusalem.

“It was 2006, when the Second Lebanon War broke out, it was like a Déjà vu, Lebanon war all over again.  I didn’t have time to think and just found myself packing my car with food, hygiene supplies, and clothing and drove straight to the front lines,” because he knew that was where he would be needed the most.

“How can I sit in my bomb shelter when there are so many soldiers with basic needs?” Many friends, organizations, and communities from back in the United States began sending donations to help and contribute to his efforts.

“After the war, donors in the USA still wanted to help and continued sending donations for the soldiers. I found myself driving to more and more army bases on a weekly and even daily basis. Very quickly, the war-time effort turned into a full-scale organization that continued operating long after. We soon started getting involved in more projects – beyond sending underwear and candy to the border. I understood what needed to be done and founded the organization Yashar LaChayal (Straight to the Soldier), a non-profit that cares for the welfare of Israel’s young soldiers.”

“Today, we run all sorts of projects such as aid for soldiers in need, assisting injured soldiers and bereaved families, building rec-rooms, gyms, kitchenettes, and synagogues on bases, and many other projects with the goal of improving the welfare of Israel’s soldiers.”

One Yashar LaChayal project, in particular, has had an astounding impact on communities throughout Israel, and has been expanding and growing very fast:

“Soldiers are protecting Israeli civilians 24/7, patrolling, standing at intersections and bus stops, protecting sensitive areas. At one point, it just made sense that we should be trying to provide for them 24/7, just like they do for us. This is how the Pina Chama – “Warm Corner Project” was born. We wanted to find a way to fulfill the needs of soldiers even at 2 in the morning, rain or shine.” 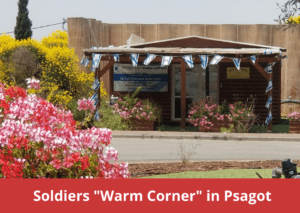 The Warm Corner – Pina Chama Project is a system of small structures that sit in strategic locations within or at the entrance to communities throughout Judea and Samaria. The communities that have a Warm Corner are part of the IDF patrol routes in the region and are often in dangerous or sensitive areas. While the soldiers are on their routine patrols, they can stop in at the Warm Corner to rest in the air conditioning, make some coffee, have a snack, and continue on their mission.

Yashar LaChayal currently operates 20 Warm Corners throughout Israel! 18 are in Judea and Samaria, 1 is near the Gaza Strip, and one was just opened on the Lebanese border. More Warm Corners are in the making for additional key locations!

Many people in Israel want to give back to the soldiers but have no platform from which they can do so. Every Warm Corner is run by volunteers

The Warm Corner is also critical for the soldiers’ sense of community and purpose; many of them come from coastal/central cities in Israel and had never been over the green line before enlisting. By interacting with the people whom they are protecting, they have a better sense of purpose and know exactly what and who they are defending.

The Warm Corner project has quickly become Yashar LaChayal’s flagship, providing for the welfare of soldiers, donating to the security of Judean and Samarian communities, and fostering a sense of community and purpose for the soldiers and the residents of these regions.

Organizations, communities, and families from all over the world have donated Warm Corners for Israel’s soldiers and there are plenty of additional communities waiting for the opportunity to open one.

If you would like to learn more about the Yashar LaChayal Warm Corner Project, visit their website for more information: www.yasharlachayal.org 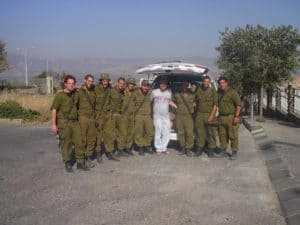