Home » Stories » How He Stands Strong in the Face of Terror

How He Stands Strong in the Face of Terror

PrevPreviousWhat Was This Hilltop Settler Doing In India?
NextEducating in the Fields of the Heart of IsraelNext

Amotz Eyal was twelve years old when he brought his first lawsuit to the Israeli Supreme Court.

When he was fourteen, he and his friends began their own high school for students who thought out-of-the-box.

“It happened in those days that Moses grew up and went out to his brethren and observed their burdens.” (Exodus 2:11)

Most likely Amotz would quickly dismiss the comparison between Moses, our great leader who brought the Jewish people out of Egypt, and himself but Amotz has spent most of his life observing the suffering of his brethren. 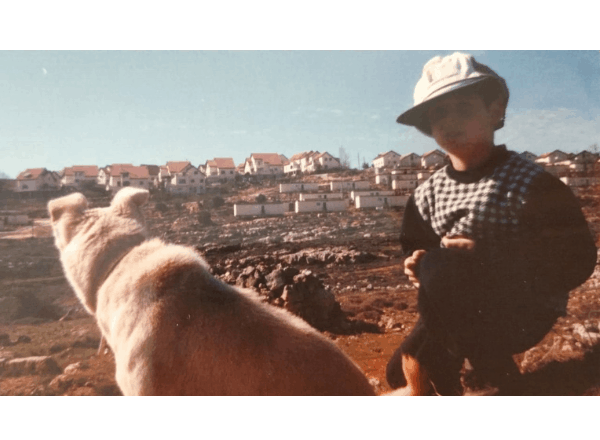 Born in 1987, at the beginning of the first Intifada, terror was a fact of life for the young boy. His home was in Psagot, a Jewish village that’s a stone’s throw (or a bullet whiz) away from Al-bireh, an Arab suburb of Ramallah.

He was just a boy the first time he saw a shooting. Out for a walk with a friend he saw a bullet fly over his head and hit a nearby bus stop. As time went on he began watching for the bullets. He and his friends were in competition to call Galei Zahal (the army radio) to report any shooting. Whoever was first to make the report would receive seventy-five shekels. Through the course of his childhood Amotz received about 300 shekels.

“The shootings didn’t make me angry or scared. Rather they motivated me to want to do something.”

And he did a lot!

Working with cancer patients inspired him to become one of Israel’s youngest medical clowns. He fought the Israeli Sports Association in court so they would stop holding soccer games on Shabbat. Now two games a week are available for Shabbat observant fans. He put hours into helping out in the Security Room. He organized memorials for terror victims. And it doesn’t stop there.

Like so many, Amotz was horrified by the government’s plan to destroy the Jewish villages and towns of Gush Katif. He wasn’t impressed with the national-religious camp’s method of protests and organized different kinds of rallies to reach out to the less observant population. Keeping the color orange, Gush Katif’s symbol, he organized programs such as Songs in Orange and Yes to Trance/No to Transfer: Dance Orange in Tel Aviv.

After the Expulsion he exchanged his orange shirt for an army uniform and became part of a special surveillance unit. However, he made a decision not to take part in any eviction of Jews from their homes. His unit was active in the violent evacuation of Amona, where his brother was seriously injured* as a protester, and Amotz transferred to a Nahal unit and there served out his full service.

Afterwards he was a camp counselor in America, returned to Israel, worked in security, and began Student Villages, a way for college students to receive free rent in return for helping their hosting communities.

Ten years ago his father gave him some video cameras and Amotz distributed them to various friends in Sussia, Gilad, and Moan, hot spots in the news, asking them to record interactions between the soldiers, villagers, Arabs, and anti-Israel demonstrators. That’s how TPS, Tazpit Press Service, an Israeli Press Agency got its beginning.

Amotz claims that most of the news generators covering the Israeli Palestinian conflict for worldwide news networks are Arabs so, of course, there’s a media bias. He’s determined to change that bias. With a staff of nine, TPS is an Israeli news agency (NGO) that provides real time, accurate and reliable news information. Amotz first began selling stories to the Jewish Press, Arutz 7, and Ynet. That has expanded to more than 180 leading media outlets around the world, including Azerbaijan and North Macedonia.

Amotz’s goal is to report what happens inside Israel with honest eyes so that the other side, those seeking Israel’s demise, will be on the defensive. He feels that TPS was a large contributor to Jeremy Corbyn’s defeat.

“The majority of the world wants to learn the truth and I believe in the power of the Land of Israel and the People of Israel.”

It’s that belief that has him and his wife, Ya’ara, of eighteen months living in Alon, a village on the edge of the Judean desert. Although the view there is outstanding, it is really the commitment for the religious and secular to build a community together that makes Amotz and Ya’ara want it as their home. They’re expecting their first child and look forward to raising him or her there.

Not one to sit back and relax, Amotz began another company around the same time as his marriage. Called Jnnovation, its goal is to develop products based on Judaica sources that are appropriate for Christians as well as Jews. A game loosely based on Monopoly that follows the footsteps of Abraham, Yitzhak, and Yaacov all the way from Be’er Sheva to the north of Israel will be on the market soon.

Despite the seventy bullet holes in his parent’s home when he was growing up, Amotz maintains he and his six siblings had a wonderful childhood. It forged him into a doer and a builder of the Jewish people. Like Moses, sometimes he has setbacks and disappointments with his work, but he’s committed to TPS’s battle against terror and anti-Semitism.

Amotz’s small staff is supported mainly by private contributions. Secure, US tax-deductible donations can be made at causematch.com/TPS . To subscribe to the TPS newsletter contact tazpit.org.il.

*Today his brother is fully recovered[/vc_column_text][/vc_column][/vc_row]