PrevPrevious“Arise, walk through the land in the length of it and in the breadth of it; for unto thee will I give it.” How it’s done today?
NextLiving the Bible: Teaching Your Children to SwimNext

“And the Lord spoke unto Moses: ‘Depart, go up hence, thou and the people that thou hast brought up out of the land of Egypt, unto the land of which I swore unto Abraham, to Isaac, and to Jacob… a land flowing with milk and honey” (Exodus 33: 1-3).

In the Southern Hebron Hills, the very same region where the holy site the Cave of the Patriarchs is located, you will find the beautiful town of Negohot. In this tiny settlement, the verses from Exodus come alive at the home of Shimrit and Baruch Foychtvanger.

Shimrit and Baruch Foychtvanger are bee farmers and the founders of Negohot Honey. Baruch has been involved in beekeeping for his entire life, having learned the trade from his father. Although he grew up around bees, he decided to study agriculture, in order to excel at his trade. His studies have paid off, and he now produces some of the country’s most unique and delicious honey.

Many of us know the basics of bee-life. They fly from plant to plant gathering pollen to eat, and thus bring pollen from male plants to female plants, helping the second plant to grow. Plants can be pollinated in other ways, such as the wind blowing the pollen from plant to plant. But, Baruch observed the bees’ actions, and harnessed their hard work to make his unique honey. Throughout his farming cycles, he moves the hives around his farmland. For example, in the winter, the hive is situated near the avocado trees. In the later winter months, he moves the hives to his almond trees. When the weather warms up, he moves them to the cherry orchard. The bees help his plants grow, and the pollen from the different plants affects the taste of the honey that the bees produce. His range of honey includes avocado flavor, wildflower, and more.

Commercially produced honey does not have a rich, deep flavor. This is because they usually live on a diet of sugar water. The result is consistent, cheaply produced honey, which is more sugary and less healthy. Negohot Honey is not consistent, and that is part of its beauty. The hive-rotation around Foychtvanger’s farmland results in different colors and flavors of honey. According to Baruch, most commercial honeys are heated before they are sold. Negohot Honey is not heated before sale, as heating the honey compromises some of the honey’s natural health benefits.

Baruch fondly remembers helping his dad with his bees whenever he had free time. On school vacations, weekends, and whenever he could find the time, Baruch loved learning the trade from his father. He is proud to share his beekeeping knowledge with his wife Shimrit and their children.

The Jewish tradition has great respect for bees and their way of life. According to Baruch Foychtvanger, bees have maintained their habits for thousands of years. Each bee in the hive has a role, and does its job dutifully. There is a hierarchical system within the hive, the queen bee being at the top. According to the Talmud, just as the bees strictly maintain a hierarchy in the hive, so too Jewish scholars respect the ideas and opinions of those who came before them, and are careful not to contradict them.

The Foychtvangers are proud of their home of Negohot, and thus chose to name their company after their lovely settlement. Many members of the international community condemn settlements located in the Biblical Heartland such as Negohot. The word “Negohot” is plural for “nogah” which means “ray of light.” The Foychtvangers are proud of their hard work, and their blossoming community. They hope that their honey can serve as a “ray of light,” showing the world the beauty of the communities in Judea and Samaria.

The Jewish new year is right around the corner. Rosh Hashana, the Jewish New Year, is on the first and second days of the Jewish month of Tishrei, this year falling on September 10-11. According to Jewish tradition, the challah bread is dipped in honey during the holiday meals as a sign for a sweet new year. We also have a tradition to eat apples dipped in honey and recite the blessing, “May it be Your will, Eternal our G-d, that this be a good and sweet year for us.”

At the Heart of Israel, we would like to wish you a happy and sweet new year, a year of blessing and peace. With the launch of our new store, you can have Negohot Honey on your table this Rosh Hashana and have a taste of the Holy Land. 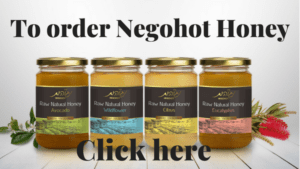