It was this past May 24,  Ronen Lubarsky, a member of the Elite Duvdevan Special Forces Unit,  age 20, was on a mission deep in Ramallah to stop a terrorist that was planning a deadly attack to kill innocent Israeli civilians.  While he was nearing the suspected house a Palestinian man through a marble slab from a third story window that hit Ronen directly on his helmet. He was critically wounded and was evacuated by helicopter to the nearest hospital. He fought for his life but two days later, Ronen succumbed to his wounds. Ronen was loved and admired by all who knew him. He was humble and brave, a fighter, and a hero.

The community that Ronen and his unit left from to do the mission, is situated at the top of a hill in Israel’s West Bank, in the beautiful settlement of Psagot. Due to its strategic location, Psagot has been a town teeming with soldiers, almost since its establishment in 1981. Many soldiers have passed through this quiet town on their way to missions throughout the West Bank, particularly in Ramallah.

The residents of Psagot have always been very welcoming to the soldiers. Local resident David Cahn took on the responsibility of making sure the soldiers had all their needs met when they were in town, resting or preparing for a mission. Locals give money to Cahn to support the troops, and for years he has used the money to buy cakes, drinks, snacks, small essentials, and more for the soldiers. If a unit is in town on a weekend, the residents make sure they are taken care of and invite the soldiers for Shabbat meals.

A few years ago, the people of Psagot decided to make a “house” for the soldiers passing through town. It would be a rec center, stocked with food and drinks, couches and a TV, and anything the soldiers would need to just unwind and have a good time. Collecting enough money for completing the rec center was not easy, and they petitioned donations from local residents until the  The Heart of Israel came along and made their dream a reality.

Ronen’s family heard about the “house” being built for the soldiers in Psagot. They knew that Ronen had spent time there, and asked that it be named after their son. The community agreed, and on the 19 of August, 2018, the community and the Lubarsky family gathered for the dedication of “Ronen’s Home.” Ronen’s parents packed up some of his things, including his TV from home, and brought it to the house. Wiping away tears, Ronen’s mother said, “I can unpack his boxes from the army now, because Ronen has a new home.” 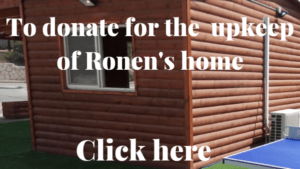