Home » Stories » What are Israeli Settlers Doing in Freezing Canada?

What are Israeli Settlers Doing in Freezing Canada?

PrevPreviousInfused with the Love of the Holy Land
NextFrom the Mamans’ Bitter Exile, a Sweet Delicacy was BornNext

Six Israeli “settlers” stepped off the plane in bitter-cold Canada.

It was the dead of winter and they could see the snow piled up high, much more snow than they had ever seen in Israel.

Feeling completely out of their usual element, they were suddenly welcomed with open arms by the Word of Life Community in Edmonton.

They were invited to organize a special Israeli Products Fair to display the unique talents of the farmers and entrepreneurs of Judea and Samaria and to meet and connect with the community.

As it says in Exodus 33:3, Israel is a “Land flowing with milk and honey,” and they were excited to show what exactly the Bible meant by “milk and honey.”

Each couple with their own unique story, all came to share the same message:

Pioneers in the Holy Land are bringing the ancient prophecies to fruition.

The Heart of Israel is green and blooming and it is all under the hard working hands of the Jewish Israeli nation.

Just as G-d promised, one day when the Jewish people return to the promised land, only then will the land flourish:

“The wilderness and the parched land shall be glad; and the desert shall rejoice, and blossom as the rose. It shall blossom abundantly, and rejoice, even with joy and singing.” (Isaiah 35:1)

This Canadian community of Christians were sincerely interested in hearing the true reality of Israel today, not only of what the media portrays.

With all the BDS and anti-semitism around the world, on college campuses, in stores and communities, it was shocking and profoundly heart-warming, to be greeted in Canada by people of a different religion, yet a similar mission.

People who not only support Israel but love seeing the prophecies come alive as much as we do.

“We were so touched by the unconditional support that the entire community gave us. And it was all based on our mutual belief in G-d and the Bible and that the Holy Land was given to the Jewish people,” explained A.Y. and Rivka Katsof, originally from America, but who now live on the hilltop community of Aish Kodesh, deep in the heart of Israel.

“It was so inspiring to see people living thousands of miles away from our little country and yet, not only are they our allies but they truly share the same vision and the same excitement in being able to see the prophecies come true and take part in it, too. They are the very best partners in this mission of settling and rebuilding the land and supporting its pioneers,” A.Y. recalled.

This generous Edmonton community were so inspired by the words of the Bible:

They brought electrical power to the hilltops of Samaria when they heard that a mother and her children were suddenly left with no power. 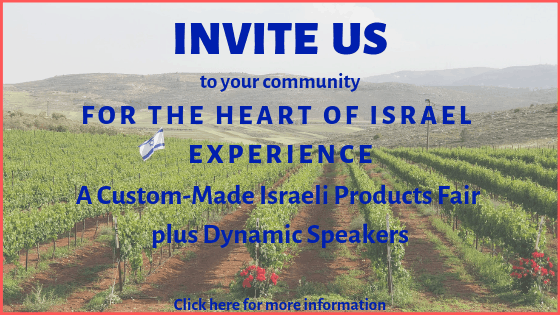 The second couple on this trip, Ezri and Ora Tubi, an Israeli couple from Yitzhar, a beautiful community in Samaria, were so surprised by the reactions of the people they met in this Canadian community.

“My perspective completely changed! I grew up in Israel thinking that all the other nations hated us, but here we were standing among people that loved us and supported us. They really opened my eyes,” claimed Ezri, the founder of Boomerang, an organization that advocates for Israel through Social Media.

For Ora, this was her first long trip overseas and she insisted that it was one of the most special and unique trips of her life.

“It was so inspiring meeting these amazing people. It was a meeting of the hearts, with no masks- there was a real instant connection, straight to the heart. They opened their homes to us and made us feel like royalty.

It was extremely uplifting to meet people whose hearts are filled with the desire to do good in this world. I came home inspired and happier. They really loved us and showed us that there is actually something very special going on here in Israel. We are doing very important work here and they appreciate us and the work that we do, building up this country. They even stayed in touch with us and are coming soon to visit.”

Racheli and Nachi Eyal, the third couple who stepped off the plane from the Middle East into the snowy streets of Canada, were shocked, as well.

“Wow!” expressed Racheli, an Israeli born to American parents. “We met people who actually admired us, religious settlers. But I couldn’t believe that someone admired me! I never thought that by living my normal life, I could motivate people. But to them, living here in the Heart of Israel and keeping the commandments of the Bible was so interesting and inspiring to them.”

They loved seeing all of the exquisite Israeli products that we brought for the Fair.

“We were thrilled to share the creative and hard work of the exceptional pioneers of the Heart of Israel. We had all-natural honey from the Southern Hebron Hills, calming teas from native Israeli herbs, Holy Temple salt from the Dead Sea and lots more. We are so proud of all the products being created in this small Holy state and we love having the opportunity to share it with the world.” -Racheli Eyal

On the flight home to the Holy Land, they reflected on how touching it was to be enveloped by the support and warmth of this community.

Here were people who not only supported Jews living in Israel, but who were impressed by the pioneers of the Holy Land, actually making the dreams and prophecies come alive before our eyes. They, too, believe that Israel belongs to the Jews and that the land really does flourish under our hands.

The couples landed in Israel, empowered to continue on this important mission of being a light onto the nations and keeping people around the world connected to the Holy Land.

They are planning on going back to North America soon and visit more communities to tell them about the pioneers of the Heart of Israel and share their special products that are all infused with the holiness of the land.

If you want them to stop by your community on their next trip, send AY an email: [email protected]