When God sent the Jews to exile from the Holy Land about 2,500 years ago, He made a promise, “And it shall come to pass in that day, that the Lord will set His hand again the second time to recover the remnant of His people, that shall remain from Assyria, and from Egypt… and from Cush [Ethiopia], and from Elam…” (Isaiah 11:11).

We also see in the Book of Ezekiel, God gives Ezekiel a vision of dry bones reviving and coming back to life: “Then He said unto me: Prophecy over these bones, and say unto them: O ye dry bones, hear the word of the Lord. Thus saith the Lord God unto these bones: Behold, I will cause breath to enter into you, and ye shall live” (Ezekiel 37: 4-5). Many Jewish sources interpret this scene as the revival of the Jewish People and the return to the Land of Israel. Like dry bones, that no one believed could show signs of life, so too the Ten Tribes of the Jewish People would be revived, and come back to reignite life in Israel. We have seen this prophecy come true in our lifetime. Against all odds, the words of God came true, and the Jewish people have returned home and revived the Land of Israel. There is no other land in the world that waited for their people to come back, and we did it after 2000 years, just as God promised, ink in parchment in the Bible. 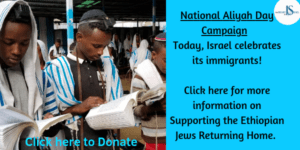 Jews returned to Israel from the East: Iran, Afghanistan, Iraq, Syria, and more. Many Jews returned from all over Europe and even the Americas. We have Jews in Israel who returned from Egypt, Tripoly, and big congregations from Morocco and Yemen. But, the one Aliya story that is the most miraculous is by far the story of the Ethiopian Jews.

It is believed that the Jews of Ethiopia are descended from the Tribe of Dan.  Exiled from the Land of Israel over 2,500 years ago, the Tribe of Dan settled in Ethiopia. For many years they had their own kingdom, but throughout their whole time in exile, they kept the Bible close to them. They kept the Sabbath, the laws of niddah (ritual purity), ate only Kosher, and maintained a strong belief that one day they will return home to Jerusalem.

The Jews of Ethiopia had a tradition that each season when the storks would fly North, they would stop whatever they were doing and run towards them and call out, “Send Jerusalem our peace.” In the winter, when they would return, they would try to catch the birds, just so they could touch something that had stood in the Holy Land.

In 1977, Menachem Begin became the Prime Minister of Israel and called the Head of the Mossad, and told him the famous words, “Bring me the Ethiopian Jews.”

At the time, no one was allowed to leave Ethiopia, because of the mandatory military draft.

Many Ethiopians were scared of the mandatory draft and made the long and dangerous trek through the mountains to South Sudan, where the Red Cross had set up camps for hundreds of thousands of refugees. 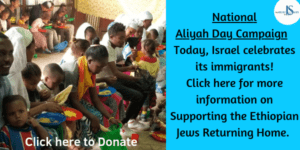 A Jewish Ethiopian scholar had a dream that the Jews of Ethiopia would return to Israel through the North-West (Sudan). Based on that dream, many Ethiopian Jews joined the treks to Sudan. They only walked at night, so as not to be seen by the Ethiopian army. They marched towards Sudan, which they hoped would bring them to the City of Gold, Jerusalem.

The Mossad sent agents down to Sudan, posing as European businessmen, looking to open up a high-end diving center. The guise worked because they were claiming to bring in high paying tourists to the exotic Red Sea Port in Sudan. The Sudanese Minister of Tourism was excited by the idea of Europeans bringing wealthy tourists to their country, and he happily gave them land on the water.

Over-exceeding their expectations, the diving center became very successful, and they had to bring more agents to help operate it.

But at night, they would sneak away to the Red Cross camps to smuggle out the waiting Ethiopian Jews.

In the beginning, it was very hard to find them, as they kept their Jewish identity a secret. They were afraid that if the Sudanese would find them, they would kill them for trying to get to their enemy country, Israel. When the agents finally identified the Ethiopian Jews, they did not believe that the Mossad agents were also Jewish, because they didn’t know that there were actually white Jews in the world. Only after the agents recited the “Shema Yisrael” did they believe that the agents were indeed Jewish. 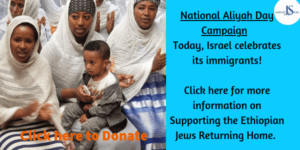 After the confirmation, the Mossad agents told them of a spot to sneak to after night fall, where there would be two trucks waiting for them. The trucks were driven by the Mossad agents all night to the port, where there was a flotilla of 13 fighters waiting for them with rubber zodiac boats. For many of the Ethiopians, this was their first time seeing the sea. They were loaded onto the boats and brought to the disguised navy ship Bat Galim that was waiting for them. From there, they were brought to Shaar Amasheck, and then on a flight to the center of Israel.

Most of them had never been on a truck before, let alone a big iron bird (airplane), but when they were on the plane they remembered the verse “they shall mount up with wings as eagles” (Isaiah 40:31).

The excitement when they landed in Israel was indescribable. After 2,500 years, they made it back to their Land. Israel had to keep it a secret, for fear that if Sudan would find out, the whole mission would be jeopardized.

When more Ethiopians started pouring into Sudan, they needed a more efficient way of sneaking them into Israel. The Israelis began landing Hercules planes in the middle of the desert, using the low flying planes to bring the Ethiopian Jews home.

I met one of the boys who walked from Ethiopia to Sudan and then flew back there to continue to help the rest of his people come back home. I asked him how he did it. How did he risk his life 17 times walking back and forth with groups, watching his people die on the way? He gave me a simple and gentle answer, “It is our love of the land, the love that we have been holding with us for over 2,500 years, for this love it is only natural that we would walk across the mountains and deserts, and endanger ourselves to come home.”

Today is Israel’s National Aliya Day, where we celebrate the return of the Jewish People to their Land. This is one small part of the long and complicated story of the Ethiopian Jews.

I have been to Ethiopia numerous times, and am currently writing a book about the entire story of the return of the Ethiopian Jews. Please donate now to help us finally bring the last 8,000 Ethiopian Jews home. 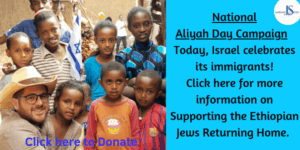