The Ancient Source of Salt Used in the Holy Temple

It was a scorching hot day in the lowest place on earth, and Alon was searching for an activity to get his kids out of the sun. In 2010, Alon Lior, an Israeli Jew from Haifa took his family on a trip down to the Dead Sea. At a little junction, Alon struck up a conversation with a Palestinian Arab, “Are you from around here? Do you know of anything nice to do with kids in the area?” Otman Chalak replied that no, he was not from here – he was from Jerusalem – but that he owned a salt factory in the area, and Alon and the kids were welcome to come for a tour. Alon took Otman’s information and they parted ways, never expecting to see one another again.

Alon could not get this interaction out of his head. Perhaps because of the biblical significance of meeting a salt factory owner at the Dead Sea, the biblical site where Lot’s wife was turned into a pillar of salt, “But his wife looked back from behind him, and she became a pillar of salt.” (Genesis 19:26). One month later, he decided to call up Otman and ask him if he remembered him. To Alon’s surprise, Otman did remember their seemingly inconsequential interaction, and invited him down to see the factory. Alon went to the factory, an old setup that was run on a generator – it did not even have its own source of electricity. He inquired about the history of the factory, and Otman shared that it had come into his possession in 1967 after the Six Day War. After the land was conquered from Jordan, representing the Israeli government, Moshe Dayan gave King Hussein of Jordan the choice of who to give the factory to – and he chose Otman Chalak of Jerusalem, a Palestinian Arab and a chemical engineer at the factory.

During his visit, Otman showed Alon the factory and explained the salt production processes to him. Upon leaving the factory, Otman gifted Alon about two kilos of salt. He brought it home, but his wife was nervous about salt from this random factory and refused to use it in cooking. Alon brought the salt to his friend’s father, who was a chemical engineer for food. He inspected the salt and contacted Alon to tell him it was the best, richest salt he had ever seen, packed with minerals that are not found anywhere else in the world. Alon seized the opportunity and joined forces with Otman, becoming his business partner and revolutionizing his little factory.

Alon and Otman hired food engineer Dr. Eddie Siegler, and together they produced six flavors of salt. Until now, Otman had only been selling to the Palestinian market. They knew immediately that they wanted to sell the salt overseas, but they first had to test it out on the Israeli market and get all of the approvals from various international food regulatory agencies. After two years of branding research, in 2012 they began selling the salt in Israel. In 2013 they received FDA approval in the United States, and at the same time they got organic certification on their products from the FDA and the PPIS. They also have green certification, stating that they are an eco-friendly business. After extracting the salt, they return the water to the sea. In 2014, they began to go to food fairs all over Europe, and entered the European market, getting their salt to Switzerland, France, and Italy. Now they sell in 12 countries! One loyal customer even said, “When I salt my food with 424, I feel connected to the Holy Land, like I am consuming the salt of the Bible.”

As the Dead Sea is located only 33 kilometers away from Jerusalem, this was indeed the source of salt that they used in the Holy Temple, as it says in Leviticus 2:13, “And every meal-offering of thine, shalt thou season with salt.”

The developers of 424 took this ancient Biblical salt and produced gourmet salt for kitchens around the world. Their unique salt combines the natural qualities of the Dead Sea with the creative spirit of modern cooking.

It is known that salt is what enhances every dish and that it is everlasting, just as the Bible describes the offerings in the Holy Temple of Jerusalem as “an everlasting covenant of salt before the Lord.” (Numbers 18:19). Why was salt used in the Temple and why do we refer to the holy offerings as a “covenant of salt“? Because salt is everlasting just like G-d’s love for His people, a message we should always internalize.

The company that Alon and Otman founded is called 424 Below Sea Level because that is the level that the factory is located. They have a warehouse near Haifa in a town called Rechashim, which is the second unlikely partnership that makes this business special. This Jewish-Palestinian owned business’ warehouse is located in a home for autistic adults. “This job gives their days structure and purpose,” says Alon. “Previously, they had nothing to fill their days. Now they get up in the morning with a place to go and work to do. They spend eight hours at the factory.” Providing work for special needs adults has become a pillar of the business; one of the main company values. As the business has grown, they need a bigger warehouse, which will be opening on January 15, 2019. They will continue to employ autistic adults, and spread the message of unity and tolerance across religions, races, and abilities.

In these turbulent times, we pray that Alon and Otman’s message of peace can spread throughout the county and set an example for both nations. 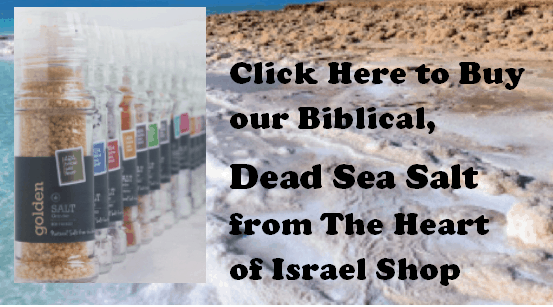