Purim – From Mourning to Gladness!

In Ancient Persia in the 4th century BCE. Haman, the head advisor to King Ahashverosh, had a plan to,

“Destroy, to slay, and to cause to perish, all Jews, both young and old, little children and women, in one day.” (Esther 3:13)

The holiday is called “Purim” from the word “pur” which means “lottery” in Ancient Persian. Haman chose the date of the Jewish massacre by drawing “lotteries,” which gave the holiday its name. The lottery fell on the 13th of Adar, but surprisingly, instead of a massacre, the Jews fought against Haman and won. The following day, which was supposed to be a day of sorrow, turned into a day of festivities.

The Scroll of Esther tells us that after executing his first wife, Vashti, for disobeying him, the powerful King Ahashverosh took Esther as his new bride. Though she kept her religion a secret from everyone in the palace – including the king – Esther was Jewish. The king’s chief advisor, Haman, tried to force a Jewish man, Mordechai, to bow to him. Mordechai refused, which enraged Haman, which led him to decree the massacre of every Jew in the 127 states that Ahashverosh ruled.

Unbeknownst to Haman, Mordechai was Esther’s uncle! He and Esther organized all of the Jews to fast and pray to overturn this evil decree. Esther asked her husband, King Ahashverosh and his chief advisor to join her at two feasts. At the second feast, she revealed her identity as a Jew and told Ahashverosh of Haman’s plans to annihilate her people. Haman was hanged and Mordechai replaced him as chief advisor to the king. On the 14th day of Adar, all of the Jews celebrated their salvation.

There are three main mitzvot, or commandments, performed on this holiday.

We perform these actions, since it is written, “they should make them days of feasting and gladness, and of sending portions one to another, and gifts to the poor” (Esther 9:22). 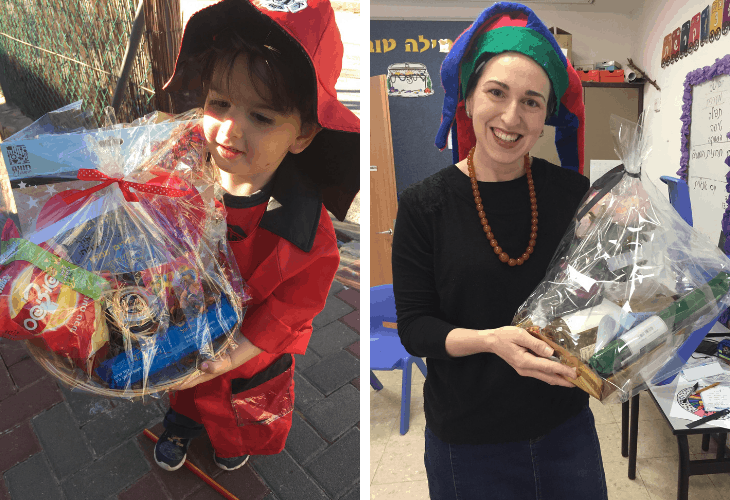 Many families have the custom of giving food gifts to several friends and family members. Finally, the day is celebrated with a festive feast, which customarily includes alcoholic beverages.

“And the month which was turned unto them from sorrow to gladness, and from mourning into a good day.” (Esther 9:22)

This verse from the Scroll of Esther introduces us to one of the main themes of Purim, “vinahafoch hu” – “and you should turn it upside down”. In the spirit of changing things up, it is customary for children (and adults if they’d like!) to dress up in costumes. The entire month of Adar is a month of celebration and happiness, and it is a mitzvah to spread joy throughout the month.

Unfortunately, as we see from the Purim story, antisemitism is a centuries-old problem. Antisemitism is on the rise throughout Europe and even in the United States, and we continue to see horrific terror attacks in Israel. We must do everything in our power to fight against the hatred. We pray that God will deliver us another miracle and we will go “from mourning into a good day” and “they should make them days of feasting and gladness.”

Wishing all of you a Happy Purim from The Heart of Israel!