Home » Stories » A settler’s version of Romeo and Juliet

A settler’s version of Romeo and Juliet

Born in Israel to British parents, Yossi never expected to meet and fall in love with someone like Ruti.

Born in Ethiopia and immigrated to Israel as a young girl, Ruti thought her and Yossi’s backgrounds were just too different to ever make it work.

Yossi and Ruti Turetsky met when they were 20 years old. They were both volunteering for the youth movement Bnei Akiva in a city called Lod. They felt an instant connection, and despite the differences in their background, they began to date. Their cultural differences seemed too great, and they decided to go their separate ways. Four years later, after they realized, that despite  their cultural differences, they both shared the same Jerusalem Dream, the “next year in Jerusalem” mantra , that every Jew says whether they are from Ethiopia or Europe. That connection is what brought them back together and finally led to them getting married. Today, they have five beautiful children and live in a settlement called Kerem Reim in the beautiful hills of Samaria. Once they saw their extended family and friends together, they recognized the miracle of their union. They both grew up with stories about the same Jerusalem, and their backgrounds were really not as different as they seemed.

In order to share their story with the world, singer and songwriter Yossi wrote a beautiful song and made a truly emotional video which he shared on Youtube. In the song, he sings about the Godly miracle that brought him and Ruti together from opposite ends of the world, after thousands of years of exile. In the end of the clip, verses from Ezekiel appear on the screen, “With your sweet savour will I accept you, when I bring you out from the peoples, and gather you out of the countries wherein ye have been scattered; and I will be sanctified in you in the sight of the nations. And ye shall know that I am the LORD, when I shall bring you into the land of Israel, into the country which I lifted up My hand to give unto your fathers.” (Ezekiel 20: 41-42). Prophecies are coming true every day in Israel, as Jews come back from all over the world to their homeland, and miraculous unions like Yossi and Ruti’s take place.

To date, their video has over 74,000 views on Youtube. Since the release of their video, they began to write, lecture, and perform all over Israel about the history, culture, traditions, and homecoming of Ethiopian Jewry. When they realized how important their message was, they wrote and began performing a play. In the show, Yossi plays a British professor, and Ruti plays an Ethiopian woman. The play is about the history and culture of Ethiopian Jews, a demographic that tends to be misunderstood in Israel. With the success of the play, they decided to write a children’s book in comic book format. They hope that the book will appear in schools across Israel. Their goal is to show Jews all over Israel and all over the world that although we are different, and we were separated in the Diaspora for many generations, we are all Jews, and we all share a common history and a common future. The stories we hear as children play an integral part in shaping our worldview, and Yossi and Ruti have set out to spread love and acceptance to the next generation. 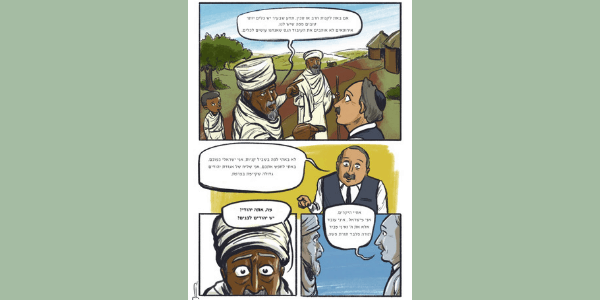 Today, Yossi and Ruti live in a beautiful, young community in the hills of Samaria. The town has only 45 families, but they expect another 40 to move in within the next year. Yossi tells me that his community is a representation of him and his family and everything that they stand for – he sees the miracle of kibbutz galuyot, the ingathering of the Jews from all over the world, every day in his own town.

Help make the Turetskys’ dream a reality and contribute to their beautiful book. 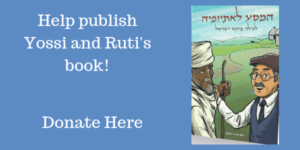