Home » Stories » How a British general used biblical tactics in battle against the Ottoman army.

How a British general used biblical tactics in battle against the Ottoman army.

PrevPreviousCreating Prayer Jewelry from Biblical Landmarks
NextUNESCO is Rewriting History. The City of David is Uncovering the Truth.Next

There is no doubt that one of the Bible’s most interesting stories is about the beginning of the monarchy. Previously, the nation was divided into tribes, and they were now unified into one nation, under one king. There was a high ranking man from the tribe of Benjamin named Saul. After he heroically saved the people of Yavesh Gilad from the Amoniteking, he made a permanent army, with which he founded the kingdom, and expelled the Philistine people.

The army was 3,000 men under the command of Saul and his son Jonathan. They were located in the territory of Binyamin, with Saul on Mount Bethel and Michmash and Jonathan in Givat Binyamin. Yonatan struck the Philistine governor in Geva, and in effect began a rebellion against the Philistine rule that was in Israel with a strong hand. Saul and Jonathan collected taxes and supervised the production of iron.

When there was a rumor of the death of the ruler of the Philistine, the Israelite army once again, under Saul’s command,  gathers and prepares for war.

We are living in the very land that these events took place. But, how do we identify these ancient site?

Saul establishes his kingdom in the city of his residence, which is Givat Binyamin, and changes its name to Givat Shaul, and makes it the first capital city of the kingdom of Israel. This place is today identified with Tel El Sol, located in Pisgat Ze’ev in northern Jerusalem. This identification is based on the location of the Tel (hill) to the north of Jerusalem in Nahalat Binyamin, and archaeological findings from the excavations, including a fortress from the time of King Saul.

However, it seems that in this chapter, Givat Binyamin or Geva Binyamin, which appears in the verses, is not Giv’at Shaul, but Geva, a city north of Tel el Ful, on the banks of the Michmash River. Geva is one of the cities of the priests in Nahalat Binyamin and is today identified with the village of Jaba, which preserves its ancient name.

On the other side of Nahal Michmash (only a few kilometers north of Jerusalem) lies the place that gave the river its name – Michmash. Ancient Michmash is now identified with the village of Muhammas on the northern bank of the river, a modern Jewish town called Michmash

Between these two places, a junction crossed the road from Jerusalem, northward to the Jordan Valley, and westward toward Beit Horon. This junction was on Nahal Michmash, in one of the few places where it is narrow enough and convenient to cross the stream. This was called the Michmash crossing 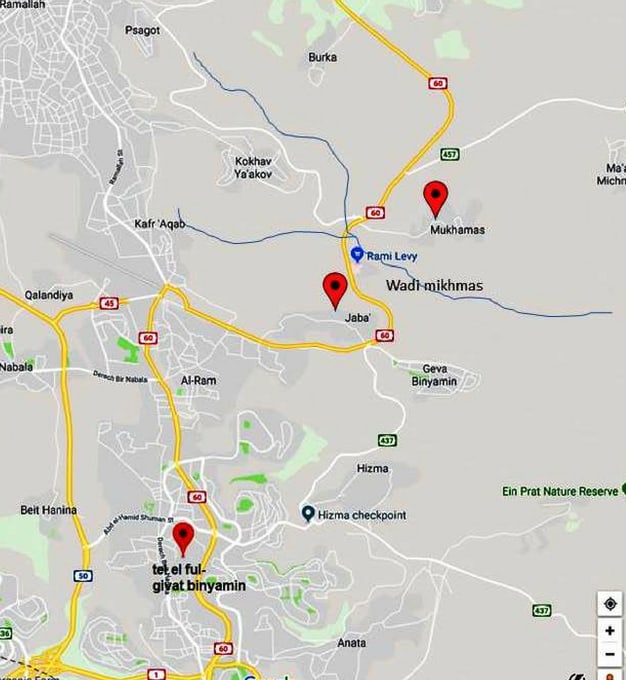 Now that we are familiar with the let’s go back to the battle:

The Philistines gathered their army into Michmash, and Shaul descended with his army to Gilgal, which is apparently near Jericho. There, they await Samuel the prophet – who will come to sacrifice the burnt offerings and pray before going to war. Samuel is delayed, and the people become very afraid and start to flee – some hide in the caves in the east of Benjamin, and some flee towards the eastern Jordan, the mountains of Gilead.

When Shaul sees the flight of the people, he decides to do something and sacrifices the offering, himself. When Samuel arrives and sees what is happening, he predicts for the first time that the kingdom will be torn from him and given to another man.

After the departure of Samuel, Saul commanded the people and sees that only six hundred people remained with him, as opposed to the Philistines: “And the Philistines assembled themselves together to fight with Israel, thirty thousand chariots, and six thousand horsemen, and people as the sand which is on the sea-shore in multitude.” (1 Samuel 13:5). 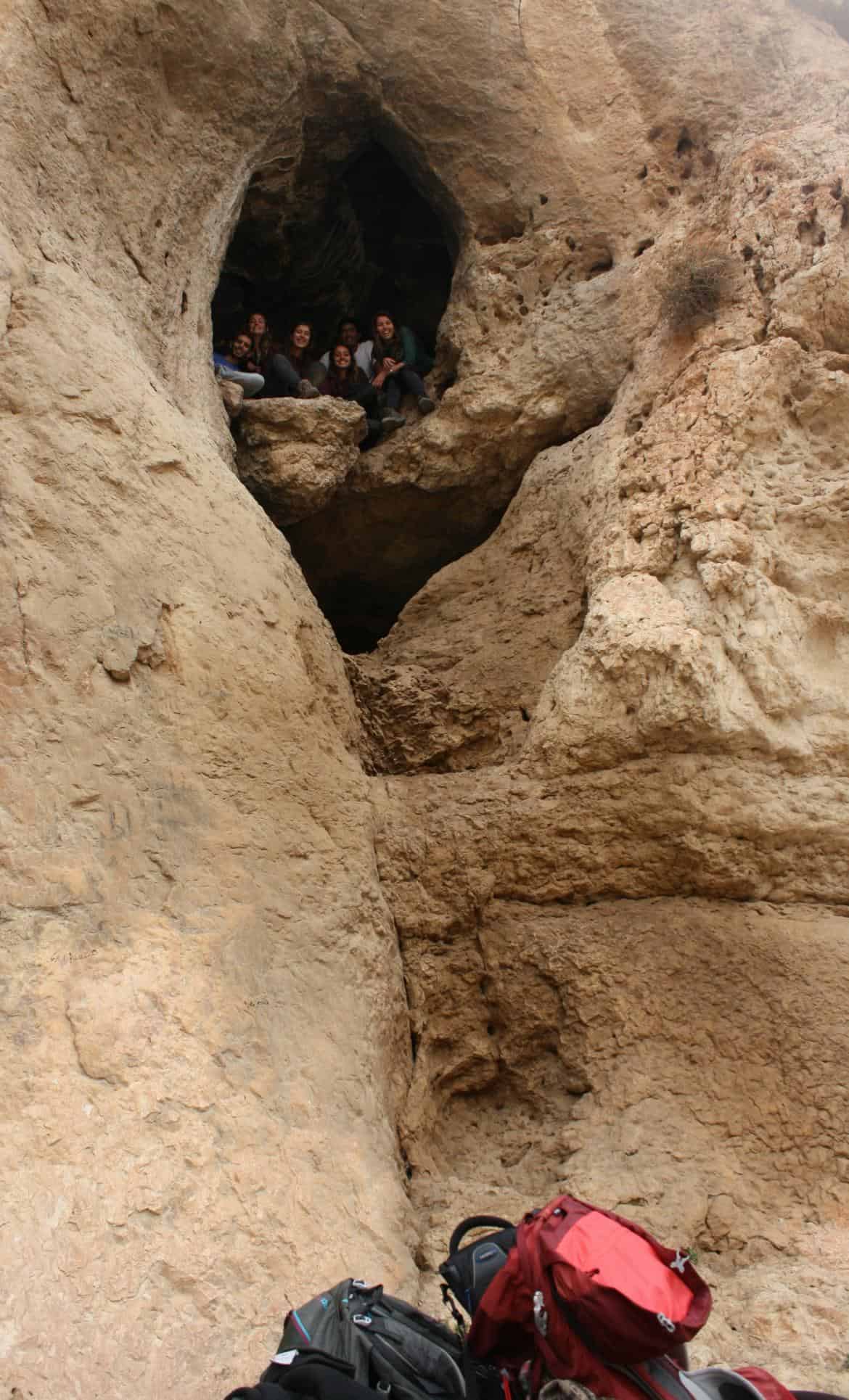 The Gorge Cavern in Nahal Michmash – by Ofra Field School

Saul and Jonathan and their host camp in Giv’at Binyamin, when Nahal Michmash and its cliffs separate them from the Philistines, who send a guard force to the passage from Michmash – the road that crossed the stream we mentioned earlier.

“And Jonathan said to the young man that bore his armour: ‘Come and let us go over unto the garrison of these uncircumcised; it may be that the Lord will work for us; for there is no restraint to the Lord to save by many or by few” (1 Samuel 14:6). In the end Jonathan decides to do something. He does not tell his father, and goes alone with his bearer to a Philistine outpost. They descend to the stream through the great cliffs called “Seneh and Bozez” and are on both sides of the stream, and climb quietly to the Philistine camp. Jonathan and the boy surprise the Philistines and cause an uproar in the camp. The Israelites, who see their retreat, also join the war, and expel the Philistines from the territory of Benjamin.

In 1918, towards the end of the First World War, the British reached the southern bank of the Michmash River, when the Ottomans were entrenched in the village of Muhammas and were not allowed to continue north. The steep, deep, cliff-like course of the river remains as it was during the days of Saul, and the British decided to descend into the river in a great attack, with many soldiers and cannon fire, although it is clear to them that the battle will be difficult.

On the eve of his departure, the officer of the British Operations Branch sat in his tent reading the chapter on the war of Saul and Jonathan with the Philistines, and thought to himself, “This passage, those cliffs … they are all still standing in their place. After all, nothing had changed in Palestine throughout generations.” 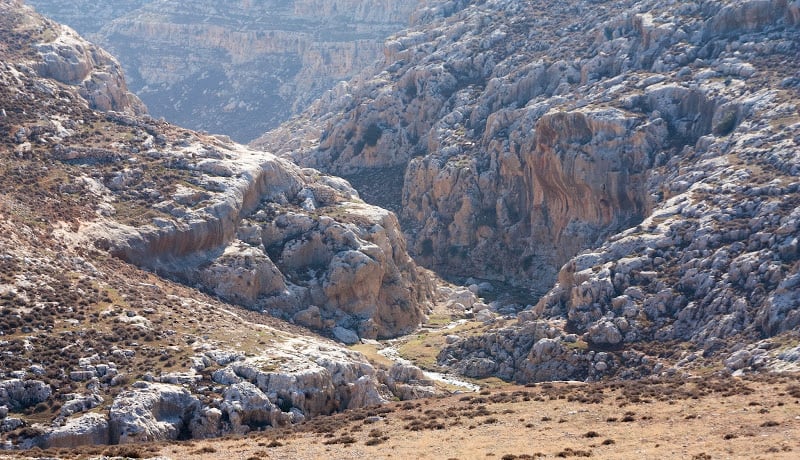 Bozez and Seneh in Nahal Michmash – by Ofra Field School

The officer showed the general the chapter in the Bible, and the plan of attack was changed. In the darkness of the night, one platoon advanced up the Michmash Pass, between Bozez and Seneh, the great cliffs. The sleeping Turks, having assumed that the entire British army was crowding them, fled in panic.

Thus, thousands of years later, Jonathan’s war tactics were once again used by British forces. We have so much to learn from the Bible, even the most unexpected things!