PrevPreviousBringing Home Ethiopian Jewry
NextWhy do Jews Move into Huts for a Week?Next

“And nations shall stand and feed your flocks, and foreigners shall be your plowmen and your vinedressers.” (Isaiah 61:5)”

Every year, hundreds of Christians come to Judea and Samaria with an incredible organization called HaYovel. Groups come each year, twice a year, in harvesting and pruning seasons, to help out the farmers of Israel’s Heartland.

HaYovel began with just one family. The Waller family were organic farmers from rural Tennessee. The father, Tommy Waller felt that the Land of Israel was calling to him. The Wallers were raised as Bible believing Christians, and they saw that there is a lot about agriculture written in the Bible, but none of it was about Tennessee. They always felt a real love for the Land of Israel, and a passion for restoring it, and so Tommy and his wife Sherri packed up their seven sons and four daughters, and together they went to visit the Holy Land. What they saw on that trip changed the trajectory of their lives forever.

In 2004, the Wallers sold their farm and moved their family to Israel. Tommy saw the prophecies of the Bible coming to light before his eyes. “Again shalt thou plant vineyards upon the mountains of Samaria; the planters shall plant, and shall have the use thereof” (Jeremiah 31: 4). Judea and Samaria were finally being settled by Jews again, and he saw for himself that vineyards were being planted on the rocky hills of Israel’s Heartland. He saw the prophecies being fulfilled in his lifetime, and he knew that it was his mission to take part in this, as it says in Isaiah, “And nations shall stand and feed your flocks, and foreigners shall be your plowmen and your vinedressers.” (Isaiah 61:5)” His vision was that he and his family would be among the “nations” who were helping the Jewish people farm the Land of Israel.

What drew Tommy and the Waller family to Judea and Samaria in the first place was their deep religious roots. Over 80% of the Biblical stories took place in Judea and Samaria, and they wanted to walk the paths of their forefathers. What kept them here were the relationships that they built, and the prophecies that they believed they could help fulfil.

What began with just the Waller family has grown into a massive global organization. This harvest season, over 400 Christians from 30 different countries gathered in Israel’s Heartland to help Jewish farmers harvest their crop. The Wallers have taken part in fulfilling the vision of Isaiah by gathering the “nations” in Judea and Samaria to help the Jewish farmers with their harvest. The volunteers do not take ownership of any Israeli land, they are purely here to fulfil prophecies and help Jewish farmers build up the Land. When the Wallers first arrived in Israel’s Heartland, the agricultural revival and the vineyard movement was just beginning. In the past 18 years or so, Judea and Samaria’s vineyard growth shot from one bottle of wine produced to over 1 million bottles of wine in 2018. As Joshua Waller, Tommy’s son put it, that kind of growth is clearly the fulfillment of prophecy.

HaYovel is based out of a Samarian settlement called Har Bracha, which literally means the Mountain of Blessings. The Wallers have developed a great relationship with local leader, Rabbi Eliezer Melamed. He has played a great part in fulfilling Tommy Waller’s dreams to establish this incredible organization. Rav Eliezer and Tommy have seen the hateful work of BDS and other anti Israel global organizations, and they want to gather the nations to do positive work in Israel; to build Israel, not tear it down. The participants of HaYovel work in the fields harvesting grapes four days a week, and spend two days a week touring Judea and Samaria, getting to know the land and the people of the Biblical Heartland. Bible in hand, they explore, watching the ancient stories and prophecies come alive before their eyes.

There are some incredible vineyards that would simply not be able to exist without the help of HaYovel. Joshua Waller shared with me that many farmers can plant as many grape vines as they want on their land, but do not possess the manpower to harvest. HaYovel helps these farmers prune and harvest, allowing them to plant even larger vineyards. Some farmers in Judea do not even expand their vineyards for financial gain – it is purely out of the desire to fulfil the prophecies, seeing vineyards on the hills of Samaria, and seeing the nations come together to help with the farming. 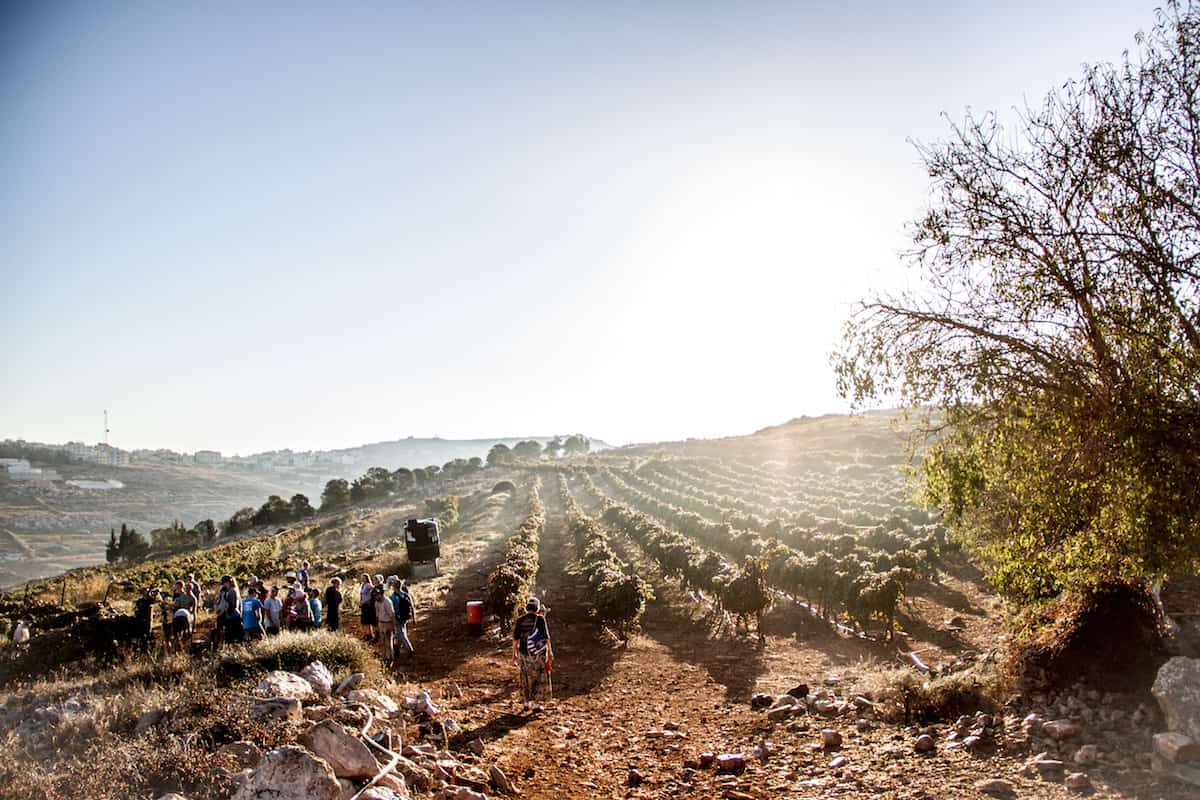 Joshua told me about the harvest in Katsof Vineyard, in a settlement called Aish Kodesh. They, along with many other settlements, truly struggled to build up the lush vineyards we see today through hard work and great sacrifice. When they first tried to begin planting their vineyards, their Palestinian neighbors would come and destroy them. It took them years to get to where they are today, and they fiercely protect the beautiful grapes that grow in their settlements today. The settlers in these towns are passionate believers, who above all else want to fulfil the word of God and settle the Land of Israel. “I have over two acres of vineyards,” said Cpt. AY Katsof, founder of The Heart of Israel, “and sometimes I truly have a hard time keeping up with all of the work. I planted my vineyards to fulfil the prophecy of Jeremiah 31, ‘Again shalt thou plant vineyards upon the mountains of Samaria; the planters shall plant, and shall have the use thereof.’” When he initially planted his vineyards, he had no idea how hard it would be to keep up with the work, especially with repeated sabotage from his Palestinian neighbors. After lots of hard work planting, nurturing, and defending his vineyards, it is finally harvest time, and his bounty is miraculously greater than he ever could have imagined. “I had no idea how we could harvest it all in time,” said Katsof, “The HaYovel group came this past Friday morning, even though it was their day off, and were able to squeeze my vineyard into their packed schedule. Within just two hours, they harvested the whole two acres. Without HaYovel, I do not know what I would have done, or how I would have managed to harvest my crop.”

The settlements of Judea and Samaria have unfortunately suffered a great number of terror attacks from their Palestinian neighbors. I asked Joshua Waller if he or the volunteers are ever afraid to come to this charged region. He replied that the goal of terrorists is to create fear. He referenced the story of the spies who came to see Israel before the Jewish people entered the Land of Israel after their time in the desert. In the Holy Land, they found giants, and all but two of the spies were scared and told the people that we could never win against them in conquering the land. Caleb and Joshua stood up against the other spies – Yes, there are giants, but we cannot be afraid of them, for we are fulfilling the world of God, and God is with us.

I hung up the phone, feeling greatly inspired by Joshua’s words. Barely an hour later, I got the news of a stabbing attack in Judea; Rabbi Ari Fuld was murdered by a 17 year old Palestinian terrorist who stabbed him in the back at a shopping center in Gush Etzion. Ari Fuld was a huge advocate and defender of Israel, and I had followed him on social media for years. I spent the rest of the day reading about my hero, Ari Fuld, and rewatching some of his videos. One quote stood out to me, as I’d heard almost the very same words from Joshua Waller’s mouth that morning. With Palestinian rockets raining down on Southern Israel, Ari Fuld went down to bring food, care packages, and emotional support to the residents of the South. When talking about the danger, Ari stated, “Listen, people, there is only one message I need to add. Remember, terrorism’s goal is to instill fear. They will lose. They will lose because Josh and I are sitting in front of the walls of Jerusalem having coffee… We’re living in miraculous times.”

As long as Jewish farmers continue to thrive in the Biblical Heartland, HaYovel will continue coming to help with the harvesting.