From Narcotics Division to Knitting Necklaces in the Judean Desert

Many people strive to build their lives, yet Rina Lotzki Levy has woven hers together from many different strands.

After many failed attempts to develop the cherry tomato, Rina was part of a team of Israeli scientists who finally succeeded in growing the now popular sweet and juicy fruit, that stars in many salads and is a valuable export crop.

This was her first creative project during her studies at Hebrew University in Jerusalem. The first attempts to grow them resulted in hard, pebble-like produce, but Rina never gave up. While working at the Volcani Center she helped turn these failures into success and she was privileged to see the fruits of her labor.

Rina, 63, was born and raised in Petach Tikva. Her parents’ families helped establish this town in central Israel which has grown into a major city. From developing juicy cherry tomatoes to fashioning stunning jewelry, Rina’s life has revolved around projects which utilized her imagination and vision.

During her biology labs she was always placed with another student, Aharon Levy, because their last names both begin with ‘L’.  While working together, they fell in love, married, and started graduate programs. Rina received an M. SC in genetics; her focus was to map the genes for sugar, color and size of tomatoes.

After finishing their studies Rina and Aharon moved to a beautiful community in the Judean desert, twenty minutes from Jerusalem. There is a steep descent on the road from this area of desert cliffs towards the Dead Sea.

“You shall make yourself twisted threads.” (Deuteronomy 22:12)

It’s easy to imagine our forefather Abraham walking on these hills which are dotted with Bedouin encampments.  Goats leap on the rocks and there are flocks of sheep. They chose Kfar Adumim because they loved to see the religious and secular people living together in harmony. Rina explained that she’s less religious than Aharon, but each respects the other’s lifestyle. Also, they thought it was important to raise their children in a pluralistic environment.

Rina was recruited to the Israeli police’s narcotics division and developed methods to check the fingerprint of each drug. This determined where the drugs were grown and how often they were delivered. She was in charge of the profiling department and gave the information she gathered to the intelligence unit.

Rina worked at the police for twenty years. Suddenly, one day her body broke out in a rash and numbness spread through her fingers. Determined to keep working, she went from doctor to doctor seeking a diagnosis. Eventually, it became apparent that she had become allergic to the chemicals she used for drug identification.

Rina retired from the police. Since she’s a naturally gifted researcher she turned to the internet to look for methods which would help her rehabilitate her hands.  She ate organic produce, did physical therapy and looked for art mediums where she could consistently use and exercise her hands, slowly rebuilding the feeling in them. Rina tried ceramics, then someone suggested that working with beads was the perfect exercise to help her fingers heal so she studied beading at a school in Tel Aviv. These techniques spoke to her and she started creating necklaces by weaving materials together.

Rina uses silk threads, metal pieces and beads to create exquisite necklaces woven together with these elements. To add a twist, she is color-blind so each one is unique and a true reflection of Rina’s personality. She says that her color blindness often creates a blend of colors that others wouldn’t think to put together, but in the end actually enhances the beauty of the jewelry.

Facing the desert hills, Rina believes that the quiet and serene atmosphere is steeped in serenity which becomes expressed in her jewelry.  In her pieces one can feel the power of the desert along with the quiet presence of the stillness which hovers above the sand. 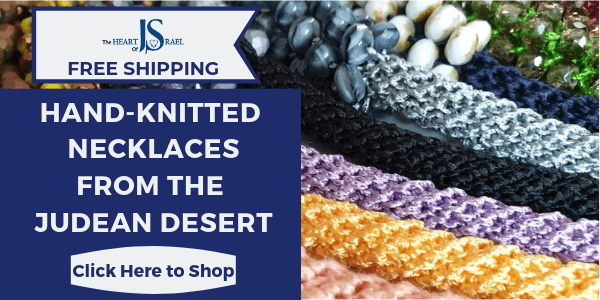 Her stunning creations are sold all over Israel and she has a dream that her hand-made pieces will travel internationally. To ensure that people worldwide will see her designs, she now sells her one-of-a-kind necklaces on our site, at The Heart of Israel Shop.

And every wise hearted woman spun with her hands, and they brought spun material: blue, purple, and crimson wool, and linen.” (Exodus 35:25)

Rina is knitting her future, continuing to refine her techniques to make beautiful jewelry and enjoying time with her children and grandchildren. While speaking with Rina, I was drawn into her warm, dynamic personality which is reflected in her pieces.

“We must not let pain and despair take over us, we can always reinvent ourselves,”  she expressed.

She firmly believes that it’s always possible to start again, that there is always more to do and that we can reinvent ourselves every day.

Rina teaches us that every bump in the road is only there so that we can grow stronger and reach even greater horizons.