PrevPrevious5 Things to know about the last Jews of Ethiopia
NextHow a British general used biblical tactics in battle against the Ottoman army.Next

The story of Sarah Feld begins at the end. After nearly 30 years of creatively encouraging and supporting women as a childbirth educator and doula, Sarah felt it was time for a change. As a hobby, she created “RingSavers,” pendants to place her rings on when she removed them to wash her hands, or for any reason, in order not to lose or forget them. The first ring saver model is called “Israel in my heart”. It is in the shape of a heart with the map of Israel in it. At its center, lies Jerusalem, our eternal capital (even though there are people that are trying to deny us of that) presented by a blue crystal. Her friends saw them and were impressed. Soon she was making them for women in her community of Beit El and many others. Before she knew it, she had sold over 1,000. Perhaps this was her calling, the next stage after leaving her work as a doula. 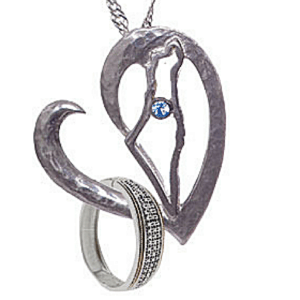 Sarah began to have vivid dreams and knew she had to share these beautiful visions, but was not sure which medium to pursue. Inspired, she began designing jewelry, and commissioned pieces by Jerusalem jewelry artist Tamar Silverstein. Sarah learned the craft as an apprentice for Tamar, and together, they bring Sarah’s designs to light.

Sarah has facilitated memoir writing groups, and offers guided imagery and healing “inner child” work.  A published author of human interest articles and political commentary, she has so far published two books of her poetry, “Your Voice I See” and “Generation of the Desert”. Sarah is a deeply creative woman, and being a doula is about as close to creation as one can get. She knew that stopping to work as a doula would cause a void in her life, and designing and making meaningful jewelry has helped to fill that void.

Sarah made aliya from New Jersey in 1981 with two babies. She now has five children, thank God. During this interview, she had to leave for the hospital to assist her daughter, who was giving birth to her twenty-something grandchild. (she will not tell us the exact number, because blessing dwells on hidden numbers).

For many years, she lived in Beit El, the site of the biblical story of Jacob’s Ladder. This beautiful, thriving Jewish town is located on one of the holiest spots from the Bible, yet many members of the international community condemn settlements located in the Biblical Heartland. Growth in these areas is heavily restricted. Sarah’s time in Beit El opened her up to dreams which she saw as visual gifts from God. The whole message of Beit El and Jacob’s Ladder is the connection of the land to the heavens. “And he dreamed, and behold a ladder set up on the earth, and the top of it reached to heaven; and behold the angels of God ascending and descending on it” (Genesis 28: 12). Beit El literally means “The House of God,” and it is known as the ‘gateway to heaven’.  For Sarah, the gateway to heaven was wide open in Beit El, and so many things began for her there. One of Sarah’s most special designs is a Jacob’s Ladder pendant. It has little beads that move up and down, representing the angels in Jacob’s dream. A woman who saw this pendant asked Sarah about the meaning. When Sarah explained it to her, she began to cry. She explained that she had three sons, and one was moving away from religion. She purchased it to remind herself that people move up and down, and her son is still special, a son of God, and might return to the faith. 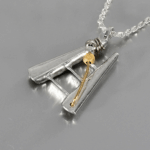 Every single piece of jewelry that Sarah creates has meaning, connecting to Judaism and the Land of Israel. Her jewelry has touched people in ways that she never imagined. Recently, she was at a fair in Shiloh, the biblical home of the Tabernacle.  A woman admired one of her new designs, which depicts a woman praying, and the words, “I rejoice in Thy salvation.” (1 Samuel 2: 1). In that very site, in Shiloh, Hannah had been praying for a child for years,and God finally blessed her with a son, Samuel.  Gratefully, Hannah recited those words which were depicted on the pendant. Sarah explained the significance of this particular piece of jewelry to the woman, she immediately began to cry and said she must have this pendant. She shared with Sarah that she prayed for years for children, and is now blessed with 12!

Sarah with some of her granddaughters each wearing a tambourine necklace 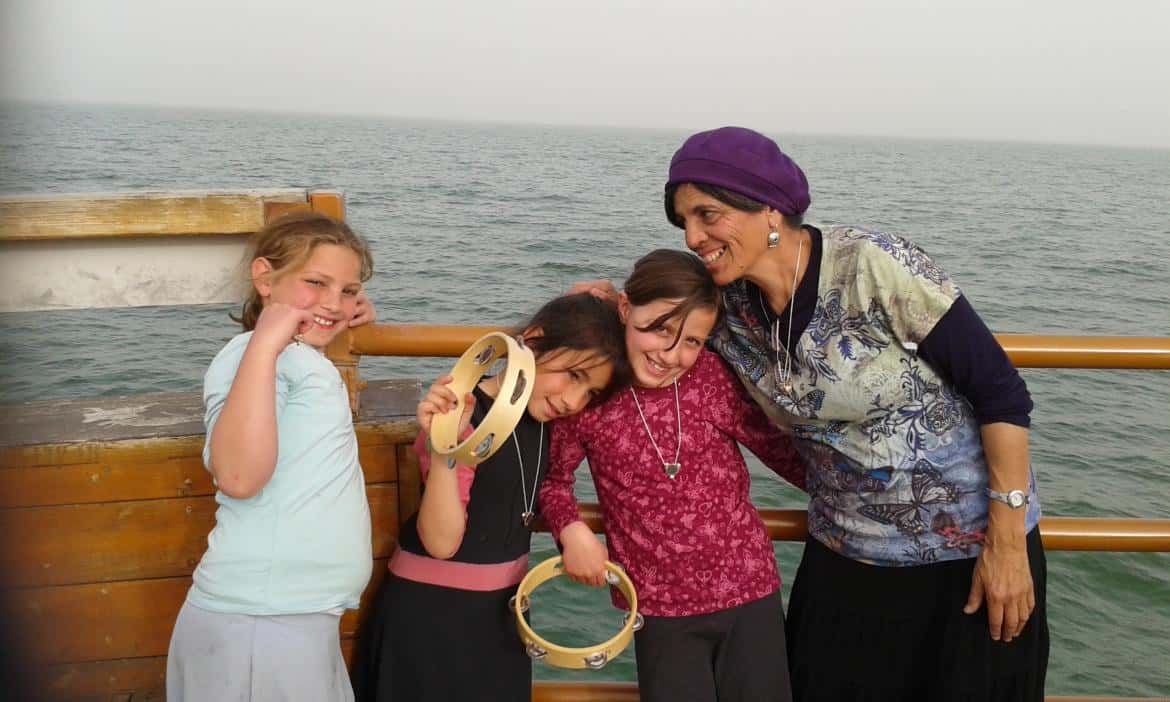 Another piece that has touched many is Sarah’s “AL Tirah” pendant. Taken from a verse in Isiah 41, 10: “So do not fear, for I am with you; do not be dismayed, for I am your God. I will strengthen you and help you;  I will uphold you with my righteous right hand.”  “Al Tirah” which literally means “do not fear.” The prayer reminds us that through all of life’s trials, we do not need to fear, for God is with us. This piece has become an iconic accessory among women fighting personal battles including serious illnesses. With every pendant ordered, Sarah sends a short, personal note. She was surprised by the number of responses she receieved. One woman told Sarah that she has cancer, and she wears her “Al Tirah” pendant for strength to remember that God is with her through this trial.She feels additional comfort in explaining the Hebrew pendant to everyone who asks her what it means.

Sarah has a special design with the blessing “sheasani kirtzono,” which means “He created me according to His will”, a blessing many Jewish women say daily.” The message of this pendant is that God has faith in women! He  created and appreciates women for their intelligence and internal sparks of enthusiasm, creativity, and ability to give birth. So many women are trying to find their place in this world, often trying to be like men. Sarah’s pendant is a beautiful reminder that God created you according to His will, and therefore you are meant to be just as you are.

After many years in Beit El, Sarah moved to the holy city Hebron, the home of Mearat Hamachpela, the Cave of the Patriarchs. Sarah always felt a deep connection to this holy site, and moving here offered her a renewed spark of inspiration. 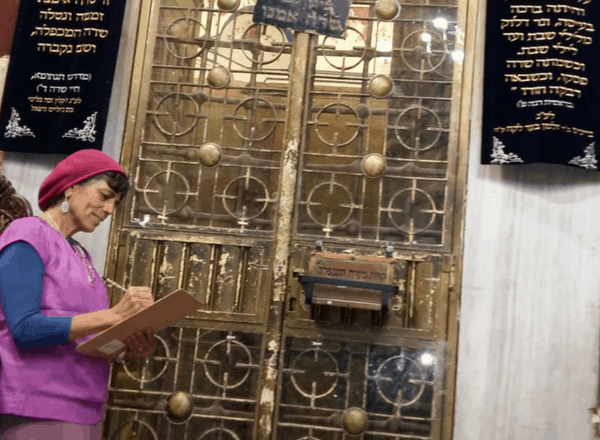 Sarah would not be making jewelry if it was just to make pretty art. Her original, meaningful and quality silver or gold jewelry touches people and changes their lives. People can see themselves in her jewelry which comes from Sarah’s heart, and touches their hearts. 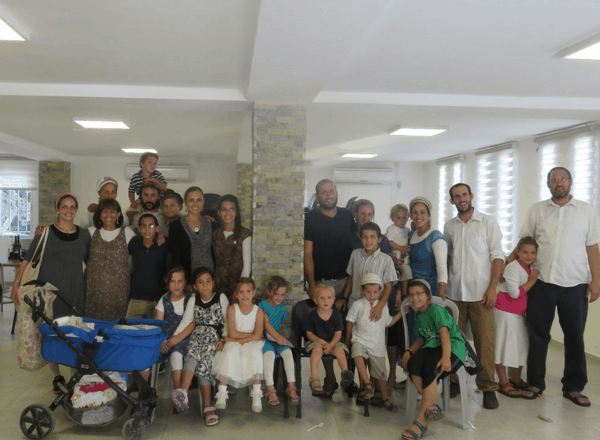 Sarah (second from the left) with part of her family

Sarah’s jewelry is now available in the new The Heart of Israel online store, and for a limited time only, receive free shipping worldwide!