Home » Stories » Connecting to the Land of the Patriarchs

Connecting to the Land of the Patriarchs

“This is where our forefather Abraham first journeyed, on his way to Elon Moreh,” declares Yossi Gross, a resident of Moshav Hamra.

Yossi knows his Bible. He explains that after our Forefather, Abraham, arrived at Elon Moreh, the Bible records:

“And the LORD appeared unto Abram, and said: ‘Unto thy seed will I give this land’; and he builded there an altar unto the LORD, who appeared unto him.” (Genesis 12:7)

Hamra itself, just east of Elon Moreh, is nestled in the Jordan Valley, the Israelites’ portal to the Land of Israel in the times of Joshua.

The throngs of tourists who visit Israel each year draw strength from their visits to the Galilee. Their trek southward from Tiberias to Jerusalem often traverses Moshav Hamra. There, Yossi and Tziporah Gross and son Liron welcome them to the Gross family’s pride and joy, Organica Farm.  The staff of Organica Farm gives its guests guided tours of the company’s lush forty-acre facility, where visitors learn of the flora, geology, landscape and wildlife of the region. While there, guests also have a chance to pick, taste and savor Organica Farm’s fresh herbs.

Yossi remarks that the tourists, “respect our agricultural innovations and express deep love and appreciation of our connection to the soil of the Holy Land.”

Inspired by the tour, and wanting to support those who successfully harness the soil of the Land of Israel, a generous woman recently approached Lior Gross with a simple question: “What size of donation can I make to support you?” Graciously declining, Lior explained, “Thank you, but we are not looking for donations. We just want to produce and sell the highest quality of the Holy Land’s organic products possible.”

The Jordan Valley once again became a region of Jewish settlement after the IDF’s victories in both the 1967 and 1973 wars. Yossi and Tzipora Gross moved to Moshav Hamra in 1978, at the height of the rebirth of the Valley. At first, the Gross family produced fragrant, colorful, flowers – mostly roses – for the European market. Although Europe’s demand for flowers reached a peak on holidays such as Christmas and Valentines’ Day, roses and other choice flora were unavailable in Europe during the winter months.

Working off just a few dunams of land, the Gross family had success reminiscent of that of the Patriarch Isaac in Genesis 26:12,

“And Isaac sowed in that land, and found in the same year a hundredfold; and the LORD blessed him.”

The experiences of the Patriarchs are a sign for their children. During peak seasons in the 1980’s and 90’s, the Grosses exported some 30,000 flowers a week, to Holland and neighboring countries!

This success lasted for fifteen years, until Africa’s expanding flower industry cut into the family business. In 1993, Yossi and Tzipora responded by entering the budding organic food industry.

Now, nearly three decades later, Organica Farm has become one of Israel’s leading suppliers of tea and spices. Tea lovers will be drawn to the wide range of Organica Farm’s caffeine-free organic teas: Lemongrass and Indian Mint Tea, Verbena and Peppermint Tea (with your choice with or without Stevia) or any one of the flavors of their signature “Best Iced Tea.” The company also produces a dazzling array of spices – zaatar, oregano, paprika, and rosemary to name a few – for both private purchase and the local and international markets.

The Gross family feel fortunate to have their fields located in the Jordan Valley. They pride themselves on using absolutely no insecticides in production, as the Jordan Valley has been blessed with a unique geography and arid climate that creates a natural bug-free environment. Secal supervision regularly inspects and certifies the facilities, ensuring that all the products meet or exceed all USDA organic standards.

Along with all of the wonderful support, Organica Farm has also felt the impact of both the formal BDS movement and other boycotts of Israeli products. Situated in the Jordan Valley, liberated by Israel in the Six Day War, Organica Farm’s international success has been limited in recent years by anti-Israel campaigns in both Europe and America. How far has this problem spread?  A prominent Jewish supermarket owner in Switzerland, in love with the company’s range of quality organic products, recently told Lior:

“Sadly, I cannot sell your products (that say they were produced in Hamra) in my store. That could very well put me out of business….”

In response, since 2012, Organica Farm has turned mainly to the domestic Israeli market, where it serves as one of the major suppliers of bulk goods for Israeli tea and spices companies.

What are Yossi and Liron’s goals for the near future? To be given the opportunity to market their pure 100% healthy, organic teas and spices to a waiting world – one that comes to appreciate the organic connection between the Jewish people and its historic homeland. 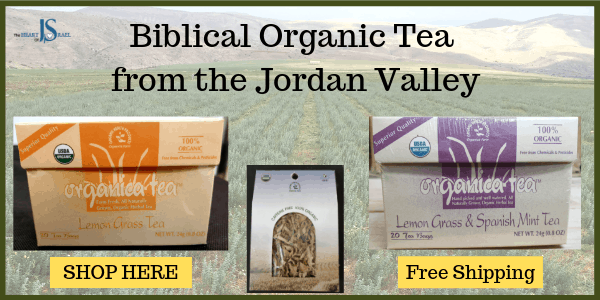