Home » Stories » Against All Odds, Doron Followed the Words of the Bible and Replanted in the Hot Desert

Against All Odds, Doron Followed the Words of the Bible and Replanted in the Hot Desert

Doron Alush arrived at a barren, desert landscape. We know from the Bible that dates were once a prominent fruit in the Holy Land, as it says,

“Jericho, the city of date-trees”

but for centuries, the land lay fruitless, without any dates at all. When the Jews returned to Israel in the 20th century, they brought date seeds with them and began planting the Biblical fruit in its homeland.

Doron was born and raised in France in a traditional household. At around age 16, he began searching for his identity, trying to figure out what to do with his life. He realized that being a Jew is more important than being French and he began pursuing his Jewish identity. At this time, he went to study bio-technology, and with degree-in-hand, he made aliya and moved to the Holy Land at age 21.

For one year, Doron lived and studied in Kibbutz S’de Eliyahu, where he did research in his field. Then, in 1999, he moved to Mevo’ot Jericho – a research facility for agriculture, which would later grow into a settlement town. In 1999 though, it was just Doron with three other young scientists, Doron being the manager of the facility. The heat was nearly unbearable, with temperatures regularly reaching over 42 degrees Celsius (107.5 degrees Fahrenheit).

Soon after moving to Mevo’ot Jericho, Doron met his wife. Mevo’ot Jericho was not somewhere she ever expected to live, but he convinced her to join him there in 1999, and they have lived there ever since. Together they have 8 children, and the community has grown to over 40 families. Four years after moving to Mevo’ot Jericho, it received town status and no longer functioned as a research facility. Instead of returning to work in labs, Doron and his wife decided to begin growing dates. They slowly learned how to grow dates and over the last few years they opened their land and facilities to tourism. People come from all over to see their date trees, and attend their workshops that show how they produce silan (date honey). They sell dates and silan, and Doron’s most recent project is making date beer! Their facility is called Kesem HaTamar – the magic of the Date. What they have seen happen before their eyes truly has been magic.

Doron feels that it is a great privilege to live here and work the Land of Israel. For thousands of years, our ancestors prayed to return to the Holy Land, a land that they could not even imagine, a land they had never even seen a picture of. Today, it might be easy to take it for granted that the Jewish people are free to visit and live in Israel. Doron feels connected to the generations who yearned to return to the Land of Israel and sees himself as their messenger. He lives in the heart of the ancient city of Jericho, the very first city that Joshua conquered upon entering the Land of Israel. Doron lives near an ancient synagogue with a 1,500-year-old Mosaic and knows that the Jewish people have finally come home. In their daily life, Doron and his family are busy with the same mundane things as everyone else – household chores, bills to pay, work to do,

but every so often, they look around and realize how lucky they are to be growing a Biblical fruit in the Land of Israel.

When the Jews went into exile, so did the dates. Upon returning to the Land, the Jewish people brought date seeds with them and planted them here. With the return of the Jews, the dates flourished, and Israel’s medjool dates are the star of the market. Israel’s surrounding Arab neighbors grow the exact same dates in the exact same conditions, but none are anywhere near the size and quality of Israel’s dates, particularly the ones grown in Mevo’ot Jericho. The average medjool date can measure up to five centimeters and can weigh up to 35 grams, but Doron found record-breaking dates growing on his trees, as large as seven centimeters and weighing 52 grams!

“Is this a special agricultural trick?” we asked Doron.

He simply answered,  “This is the blessing from G-d, as it says in the Bible, ‘Jericho, the city of date-trees.'”

Logically, after generations of growing dates, the nearby Arabic countries should have the most perfect dates in the world – but the dates of Mevo’ot Jericho grown by the Alush family are simply the best in the world because they are grown in the Biblical “city of date-trees.” 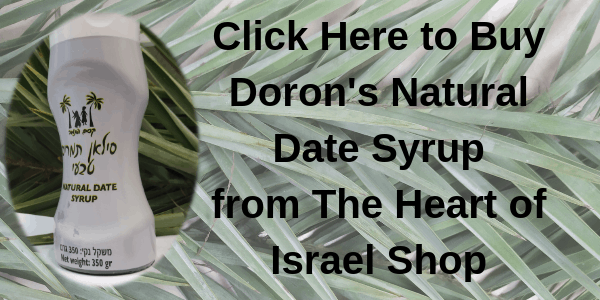